While the anti aging creams now available over the counter to the millions of women, and, yes, men, concerned about looking as young as possible for as long as possible almost all contain the same ingredients, their marketers present each one as something unique. You, as a consumer, need to learn how an anti aging cream is formulated, so that you can find the one with the right concentration of ingredients to help your skin. And you can also take other steps in your personal care regimen to ward off the effects of aging. Anti aging cream can’t do it alone. 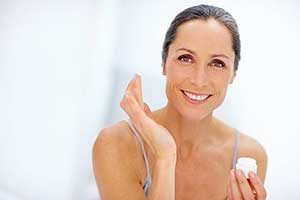 The Skin(ny) on Anti Aging Cream

If you were a fan of the TV sitcom Everybody Loves Raymond, you may remember the many scenes in which Raymond’s wife Deborah would spend time applying anti again cream to her hands. And even though she was a fictional character, her actions are repeated by millions, if not billions, of women the world over every day. The anti aging cream is seen as one of the best defenses against the ravages of time, but is it really all it’s cracked up to be?

The maker of every anti aging cream on the market is hoping that you, whether female or male, will believe that it is. Yes, even mean are not being targeted with anti aging cream from such men’s grooming products manufacturers as Biotherm. But no matter what the packaging on any anti aging cream may promise, you should not expect miracles.

The marketers of any anti aging cream are fully conscious that almost every woman has a deep seated fear of the wrinkles, lines, and age spots which seem inevitable as she ages. So these marketers are not ashamed to claim that their products have been shown, with scientific proof, to fight such signs of aging, even though their scientific proof may be nothing more than the power of suggestion.

Almost every anti aging cream will have retinol as an ingredient, and retinol is said to give its users a more youthful appearance both by stimulating new skin cell production and by decreasing the appearance of age spots. Some anti aging creams will contain both alpha and beta hydroxyl acid, which act as mild chemical peels, but the effectiveness of any of these ingredients will depend on their levels of concentration, and their correct application.

Olay, whose Oil of Olay has been around for decades, entered the anti aging cream market with its Olay Regenerist, which gets the highest marks among all anti aging creams tested by a consumer protection group. Olay markets its products by encouraging you to “love the skin you’re in.”

You probably know from experience that the cosmetic departments at your favorite retail establishments from the local pharmacy to the biggest department stores are simply awash in anti aging creams from the simple to the exotic and from the affordable to the absurdly expensive. A quality anti aging cream can certainly provide benefits, helping reduce the signs of aging, but you should not expect miracles. There are plenty of things you can do on your own to keep Father Time away from your door.

Using a sunscreen on your face, even when it’s cloudy; drinking at least eight glasses of water a day to keep you skin hydrated, and eating lots of fresh fruits and vegetables to help you stay detoxified will all have remarkable effects on your skin. Using anti aging cream as a supplement to these measures will certainly help you retain a young appearance as long as possible, but don’t think any anti aging cream will turn back the clock all by itself.

Anti-aging Skin Care
You can also find more info on Beauty help and anti aging systems [http://www.mybeautyhelp.com/anti-aging/the-secret-to-anti-aging-systems-61]. Mybeautyhelp.com is a comprehensive resource to get help about beauty.